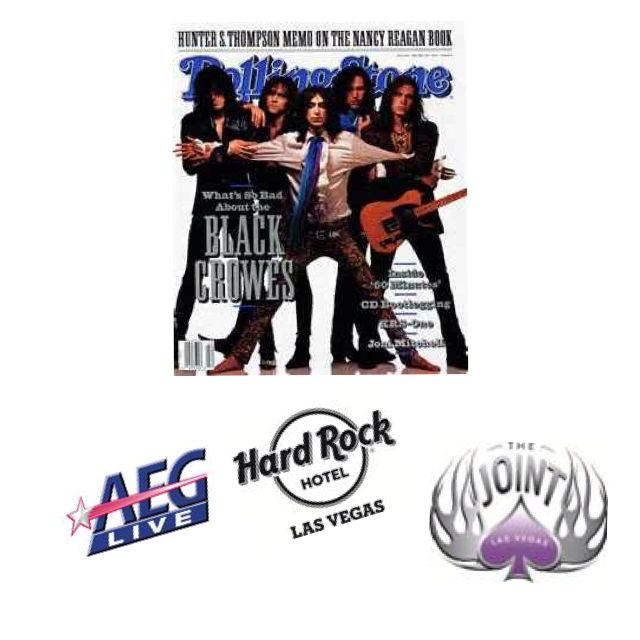 Tickets on-sale Friday at 10am!

THE BLACK CROWES have announced a new leg of U.S. dates for their “Lay Down With Number 13” tour. The tour will make a stop at The Joint at Hard Rock Hotel & Casino on Friday, December 13. Tickets go on sale this Friday at 10am.

The band’s “Lay Down With Number 13” tour--ending a two-year hiatus--kicked off March 24 with five sold-out U.K. shows. They’ve been flying high since in the U.S. and in Europe, where they performed June 18 to July 6, including headlining shows, festivals and two stadium concerts with Bruce Springsteen.

THE BLACK CROWES have sold over 35 million albums and are known as one of rock’s best live acts.  These powerful performances are captured on their latest release WISER FOR THE TIME, a four-sided vinyl collection and double album digital download (Silver Arrow/Megaforce Records).

Here’s a sampling of the critical praise THE BLACK CROWES are generating in 2013:

“The band brought its A-game...the instrumentals were dynamic and concise... [Chris Robinson’s] expressive voice can still do plenty of heavy-lifting...They sounded lean and tight and in fighting shape...The middle of the show included some wild instrumental odysseys. None was more visceral and transcendent than during ‘Thorn in My Pride,’ one of several highlights. The others: the fusion of ‘Hard to Handle’ with ‘Hush’ the Billy Joe Royal song made famous by Deep Purple; ‘Soul Singing’; and ‘She Talks to Angels.'"

“…a high-volume, high-octane performance that reclaimed the Crowes’ stature as a fierce, music-first live act.”

“It was simply one of the best pure rock and roll shows I've seen in a quite awhile, and one of the finest I've seen from the band ever. The band clicked on all levels musically as the interplay between original members Chris (vocals) and Rich (guitar) Robinson and Steve Gorman (drummer), along with Sven Pipien (bass), Adam MacDougall (keyboards) and new guitarist Jackie Greene.”

“’Wiser Time’ is shaping up to be for the Crowes what ‘Dreams’ is for Allmans--a philosophical psychedelic epic.”

"...the band was relentless, hammering out their set with conviction and urgency, making every note count...Steve Pipien, their elite bassist is beyond stellar. His lines and fills created a tapestry upon which the rest of the band could rely on sonically. The man is in a realm of his own."

“They kicked the night off with a punchy ‘My Morning Song’ and mixed a heavy dose of classic older material with more recent originals and both familiar and new covers. The band nodded to English classic rockers Traffic twice early in the set – first for a lively take on ‘Feelin’ Alright’ which they’ve played for years, and then for “Medicated Goo,” a cover first performed on this tour. “Medicated Goo” was an early highlight as Jackie and Rich shredded away on guitar…The two guitarists traded solos equally throughout the night, giving the songs a fresher sound than what one dominant lead player can provide. Nowhere was that more apparent than on ‘Wiser Time,’ as they stretched the song past the 15-minute mark. Keyboardist Adam McDougall jammed away with a colorful electric piano solo before Jackie and Rich took their respective turns – delivering solos that mixed moody experimental noise with a climax full of lightning fast shredding as Chris Robinson triumphantly hurtled into one final chorus. After the intense jamming of ‘Wiser Time,’ The Black Crowes took a turn towards the earthy and showed off their acoustic side. ‘She Talks To Angels,’ one of their biggest hits, felt totally revitalized with Jackie Greene on mandolin, while ‘Whoa Mule’ found Greene picking up a banjo and drummer Steve Gorman moving to center stage to play tabla as rustic Americana and world music wonderfully collided.”

“…the Black Crowes have gracefully touched or referenced all that is great in roots and rock music over the course of a monster discography with…swagger, piss, and vinegar…’Wiser Time’ gave the crowd a brief reprieve from the incendiary blues-rock salvos of guitar and pounding drums of ‘Remedy’ while showcasing Chris' huge range--still unspoiled at his age. ‘She Talks to Angels’ was a crowd pleaser to be sure, an aural sigh during the otherwise high-octane performance, however, it was the rockers and the burners that signified the return of the Black Crowes to their roots as an absolutely deadly rock 'n' roll unit. Rich Robinson's ability as guitarist has grown immensely over the years; once content being mostly a perfect rhythm machine, he pulled out leads worthy of any one of the band's famed former guitar foils, and his slide playing in particular made for some of the set's zenith guitar moments.”

Tickets, starting at $39.50 (plus applicable service fees), go on sale Friday at 10am at the Hard Rock Hotel Box Office, all Ticketmaster locations, online at Ticketmaster.com or charge-by-phone at 800.745.3000.