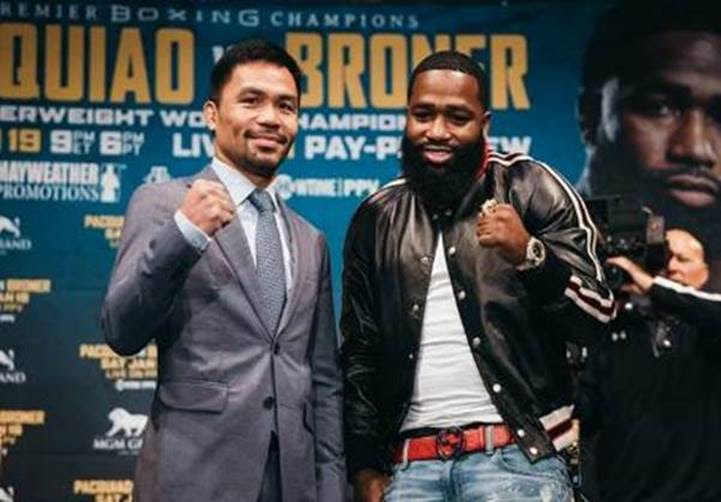 Promoted by MP Promotions, Mayweather Promotions and TGB Promotions in association with About Billions Promotions, tickets to the Pacquiao vs. Broner welterweight world championship event will go on sale on Saturday, November 24. Tickets are priced at $1,500, $1,000, $750, $500, $300, $200, $100, not including applicable service charges, and can be purchased online through AXS.com, charge by phone at 866-740-7711 or in person at any MGM Resorts International box office.

Here are what the fighters and executives had to say on Monday.

“I just want to prove that I’m still in boxing and my journey in boxing is continuing.  I want to entertain people and give a good show on January 19. You don’t want to miss the opportunity to see this great and prestigious fight in the ring with Adrien Broner. I know my opponent is fast and a top caliber fighter, he’s good and we have to work hard and train hard for this fight so the people will be happy. We will give a good fight for the fans.

“I chose Broner because we can have a good fight and entertain the fans. Adrien is a top caliber fighter and a good boxer. We cannot underestimate him.

“When I met up with Floyd [Mayweather] in Japan, we talked and he said he wants to come out of retirement to challenge me. All I know is fighting in the ring and entertaining people. That’s my job. Floyd has come out of retirement and we’ll see after this fight, but we cannot underestimate Broner and this fight. We will discuss anything with Floyd Mayweather after that.

“I can fight at 140 pounds or 147 pounds and I want to fight the biggest fighters in the world and one of those is Adrien Broner. I can fight anybody.

“I expect more action in the ring, that’s what we want. We don’t talk too much outside the ring but we will do it in the ring.

“Yes, I still have the [knock out] power. In fact, I have learned how to develop that and by the grace of god, who has given me this power and with hard work and training, that technique is my weapon for this fight.

“I have already accomplished my dream and what I want to accomplish in this sport. I just want to continue in the top of boxing and give honor to my country.”

“I’m real thankful hearing that he was coming over to PBC, ‘Pacquiao’s Broner Crisis’. I’m happy –  there are a lot of people that wanted this fight and god blessed me to get it. I guess I’m just the chosen one. What can I say about Pacquiao, he’s a future Hall of Famer.

“I had to call my momma after I looked in the mirror this morning. I had to let her know she has a beautiful son. We finally made it to pay-per-view at 29. I’m the only African-American do to that.

“It’s going to be a hell of a fight. I’m not coming to just pick up a check. I know when I win this fight, there’s more money to come.

“Of course I consider Manny one of the elite fighters at 147.  The things he’s done in this game are unbelievable. I talk trash, I play but I know on January 19 I have to be on top of my game. This is his break-out fight to be on the A-side.  I know he isn’t trying to look bad. But I’m here to knock him out. I feel like a bum trying to fight for a sandwich.

“I’m not worried about what Manny does. He has to worry about what I’m doing.  I have three losses and he has eight.  But he has been knocked out three times so we know he can go to sleep. He doesn’t need Nyquil for that, and I have the power to do it.  He better be on his p’s and q’s because I’m trying to knock him out.

“If the knockout comes, it comes. I’m just focused on my win. I’m trying to win in good fashion. I’m going to train my ass off and give it my all.

“This fight is very important from a business standpoint and for About Billions. A lot of young fighters want to work with me and I have to show them the way. As a leader, if I win this fight it gives them something to brag about. I’m not only fighting for me, I’m fighting for my family and my kids. It’s the longevity, it’s for after boxing. I have a chance to set myself up so that my kids’ kids can live comfortably

“We’re boxers. We’re not afraid of nobody. We bleed the same, we walk the same, we put our pants on one at a time. There’s nothing to be afraid of. I’m trying to knock this guy out. I might laugh, I might play around but I’m trying to get him out of here.

“Every fighter is different. I don’t compare fighters to each other. Every fighter has their good habits and their bad habits. All around, he’s a great fighter. He’s done something that nobody has ever done in the sport but it’s time to turn over a new leaf. Adrien Broner will be the biggest name in boxing.

“I feel good at any weight. I feel strong. I will let everything show January 19. It’s going to be a hell of a fight. I just want to beat the man in great fashion. It’s nothing personal, it’s just for me so I can wake up and say I beat Manny Pacquiao.”

“SHOWTIME is thrilled to be hosting this press conference and to be bringing this matchup of two must-see fighters – there is a very short list of must-see attractions, and of course these two active fighters are on the top of the list.

“Boxing’s only eight-division world champion taking on the youngest boxer ever to be a four-division world champion.  We would like to welcome Manny Pacquiao back to SHOWTIME, back to the U.S. as this is his first fight in the U.S. in two years. These two are perennial draws at the box office, ratings, and in the streets. Two of the most well-known, widely recognized boxers in the sport of boxing. Two of the most athletically gifted fighters in the sport – power, speed, quickness, they have it all.

“At this point, odds makers have favored Pacquiao. That’s understandable because he is a Hall of Famer with a Hall of Fame resume. But it would be a mistake to overlook Broner in this fight. Broner never backs down from a challenge. As long as I’ve known him and worked with him he’s never turned down a fight, not against bigger opponents like Shawn Porter, not against big punchers like Marcos Maidana, not against the guys that no one wants to fight. Broner gives them tough fights: 12 rounds against Porter, 12 grueling rounds against Maidana. So for those of you that think this is an easy fight, or easy bet because of the odds, think again. These are two of the most talented fighters of this generation, two of the most athletically gifted fighters of this generation. I guarantee this fight will be a must-see attraction.”

“This is a fight that we’ve been trying to make for several years. Our new partnership with the great Al Haymon and the PBC has finally made this possible. I’d like to thank Al and his team for making this happen. I’d like to acknowledge our new partners in this fight, Mayweather Promotions and TGB Promotions, our broadcast partner SHOWTIME and Manny’s home away from home, the MGM Grand. To Team Broner, thanks for stepping up to the plate. I hope you have a great training camp and I wish you all the best. To Senator Manny, thank you for giving all your fans this opportunity to showcase your greatness and show you are still the best fighter in the world.”

“This is a huge fight. I can’t say enough about what I personally think will be the biggest fight of 2019. You have Manny Pacquiao, a future Hall of Famer, who’s fought everybody in this era against Adrien Broner, one of the most exciting fighters in the sport. He’s the biggest attraction with the biggest ratings and never shy about the cameras. This will be a great promotion. We expect the fans across the world to tune in to this great event. Will Manny Pacquiao be able to use his plethora of experience to defeat a young Adrien Broner who's still in the prime of his career? Or will Adrien Broner be able to utilize his outstanding speed and his skillset to defeat the legendary Hall of Famer, Manny Pacquiao? Tune in, SHOWTIME PPV on January 19.”

“This is the biggest fight that we’ve been involved with, so I would like to thank everybody involved. Adrien knows what he needs to do. I’ve been with him since we were 18-years-old and we’ve been through a lot. I’ve never seen him back down from anything and anybody who’s watched him fight knows that. We look forward to bringing it and we’re going to bring it. I’m very happy to be in this position and we’re going to go far.”

Showtime Networks Inc. (SNI), a wholly-owned subsidiary of CBS Corporation, owns and operates the premium television networks SHOWTIME®, THE MOVIE CHANNEL™ and FLIX®, and also offers SHOWTIME ON DEMAND®, THE MOVIE CHANNEL™ ON DEMAND and FLIX ON DEMAND®, and the network's authentication service SHOWTIME ANYTIME®. Showtime Digital Inc., a wholly-owned subsidiary of SNI, operates the stand-alone streaming service SHOWTIME®. SHOWTIME is currently available to subscribers via cable, DBS and telco providers, and as a stand-alone streaming service through Apple®, Roku®, Amazon, Google and Samsung. Consumers can also subscribe to SHOWTIME via Hulu, YouTube TV, Sling TV, Sony PlayStation® Vue and Amazon Channels. SNI also manages Smithsonian Networks™, a joint venture between SNI and the Smithsonian Institution, which offers Smithsonian Channel™, and offers Smithsonian Earth™ through SN Digital LLC. SNI markets and distributes sports and entertainment events for exhibition to subscribers on a pay-per-view basis through SHOWTIME PPV®. For more information, go to www.SHO.com

The Premier Boxing Champions series was created and is produced by Haymon Sports, LLC. It features the most accomplished and decorated array of international professional boxing talent across the most popular weight divisions.

Pick Your Fights Carefully: Man Attacks Skater Kids 3 Times Before Getting Knocked Out With A Skateboard!

Migos Rapper Takeoff Sued by Woman Who Says He Raped Her at a Party, LAPD Investigating