The ACT Nightclub will strip down and liquor up for a packed Labor Day weekend line-up of non-stop events inside the Grand Canal Shoppes at The Venetian | The Palazzo. The debauchery will commence on Wednesday, Aug. 28, and will continue through Saturday, Aug. 31, for an unforgettable Labor Day weekend celebration.

Adult fantasies will come to life with a circus-themed ‘Peanuts and Pasties’ party led by model, MMA television host and Las Vegas’ most followed social media personality, Roni Taylor, as ringmaster. The decadent party destination will bring in guest acts such as sword swallowers, jugglers, clowns and freak shows giving partygoers the Labor Day weekend thrill they are looking for. While the only elephant to attend the party will be a blow-up, the ladies are not and the pasties will be plentiful. Spiked snow cones, cotton candy and face painting and a circus-themed drink menu will be offered throughout the evening as the cherry on top of a truly outlandish night.

Avant-garde DJ duo, POSSO, will be rocking The ACT with the fiercest electro tunes. Showcasing their sound and edgy style, the ladies will spin sets for partiers all night long. POSSO has spun for sold-out crowds at festivals including Japan’s Summer Sonica Music Festival, Pacific Fest in Orange County and the Electric Daisy Carnival in Las Vegas.

Bottle-loving sorority girls will take-in their fair share at The ACT’s ‘White Girl Wasted’ party, hosted by actresses Hayley Hasselhoff and Nathalia Ramos, plus a group of their sexy young Hollywood girlfriends. Graham Funk will provide the soundtrack to the all-night rager, followed by resident DJ, ShadowReD. Spinning late into the venue’s after-hours party will be B-Side. The ladies will leave the club, most likely with heels in hand and confetti in every crevice, and head straight to the closest 24-hour drive-thru. 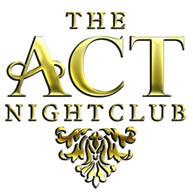 The 15,000-square-foot, multi-level space merges aesthetic elements ranging from an Italian opera house to European cathedrals, from New York City's Grand Central Station Post Office to a turn-of-the-century speakeasy. Guests experience the action unfold onstage from numerous perspectives, including private balcony boxes, banquettes on the dance floor and a backstage seating area that allows guests to mingle with the talent.

The ACT is the latest venture by Hammerstein, a seasoned theatrical producer and artistic director with nearly two decades of experience and who has been recognized in publications including Vogue, Vanity Fair, The New York Times and New York Magazine. Hammerstein is also president of the widely popular variety theatre, The Box, with locations in New York City and London. The creativity that won The Box international acclaim for award-winning design, exclusive clientele, extraordinary service, innovative live theatrical productions, and attendance by more than a million people since 2007 are channeled inside The ACT, making it the most exciting addition to the Las Vegas nightlife scene.