You call this shit music?

Oh we gon' hurt some feelings on this one.

What happened to good music? Did we hurt your feelings, I'm sorry...no damnit, WE'RE sorry.. Can somebody page Chico and El DeBarge and see if they'll come back to play? Whatever it was that we did or we didn't do, we're sorry. Can somebody play me some Ol' School Michael Jackson? How about a little Luther Vandross?? Some Sade?

Soldier Boy, If I ever see you in the street, I'm slappin the mule piss outta you.

Nicki Minaj, by the looks of this picture, your dick is bigger than mine. That really shouldn't be. 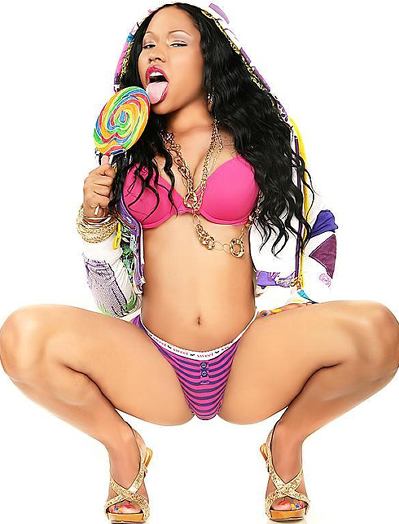 Maybe, I'm being too hard on some of these "musicians"...I can't believe I just called either one of these ripped condom leaks that word. I need my ass whooped. First of all, let's get back to Soldier Boy's ass. We're going to do what's called a compliment sandwich. It's where I say something nice, give you some constructive criticism, and then it with something else nice. Ok...Something nice...Ummm...I like your edge. It's really tight. Now, the constructive criticism...Who told you that you could rap? Better yet, where do they live? Cause I got some free time on my hands and I haven't punched anybody in the kidneys yet today. Oh, and by the way, the first rule of having 'Pretty Boy Swag' is to be an actual Pretty Boy. You keep going against all the rules. I know it sounds like I'm hating, and you're probably right, but my sweet, black newborn baby Jesus, you are a waste of skin. If you were an athlete, I'd cut you or send you back to triple A so you could hone your skills for a few Summers..and by a "few" I mean, forever. Oh yeah, something nice...Ummm..I like the way you took a white out pen to your knock off Louie Vatton's. That's real skill, my friend. You're going places...Okay, so that was a partial compliment laced with a criticism. You don't like it? Tough titty...

First of all, I've said it before,and I'll say it again, I'm like 94% sure that Nicki has Tourette's Syndrome. You ever listen to her rap? Here's a direct quote and lyric from a song that's playing on the radio right now entitled "Bottoms Up" w/ Trey Songz:

I'm sorry...What?! Giving money to the babies in Haiti one minute and R.I.P. Ana Nicole Smith the next?

That's what's hot in the streets right now, Nicki? That's what's really hood? You have got to be shitting me. Don't get me wrong...You hear this shit 40...50 times and you'll find yourself tappin your foot. It's inevitable. Doesn't make it right..or music for that matter, but it's catchy. I talk all the shit in the world, but it's catchy...But is that what we've come down to? A society that will buy and support anything as long as the beat is hot?

Honestly, I blame one man for ALL of this.

Light skinned ain't coming back. Sorry. You should have bought your stock in Boris Kodji a little bit earlier. Cause you can't bring it back by yourself. You keep tryin and I'll go bail Wesley Snipes out of jail and we'll make another 'Blade' movie in this bitch.

All jokes aside, what happened to the real musicians? The ones you couldn't wait to hear on the radio or the ones you begged your mom or your dad or your grandmother or anybody with money really, to buy their TAPE??

Now don't get me wrong, I'm not trying to bring back boy bands or have Boyz II Men remake 'Can You Stand The Rain' again, but seriously,am I the only person who sees this BS for what it is? Gucci Mane rappin about Lemonade, Soldier Boy thinkin that 1. He's a pretty boy and 2. He has swag is comical. Kanye has lost his damn mind. I miss old school rap. I miss 2pac, Snoop, Dre, Biggie Run DMC, Public Enemy and the like.

These rappers nowadays aren't rapping about life because half of them haven't lived enough of it to have anything substantial to rap about, and even if they did, it would just revert back to how many Bentleys and Bitches they have back at the crib.

Every once and a blue moon, we'll get a Musiq Soulchild, Noel Gourdin, India Irie, Ne-Yo, Wyclef, or Alicia Keys, but they can't do it alone and even sometimes for as great as some of these musicians are, they get lost in the shuffle with the bullshit. One thing I've always told my friend, business partner, and fellow musician, Rashon Medlock is that timeless music will always prevail and will always stand the test of time.

When I think of some of the greats like Tina Turner, Aretha Franklin, Sam Cooke, B.B. King, Smokey Robinson, Ray Charles, Michael Jackson, and the like, I think of artists who's music stood the test of time. It did so because it was art. It was masterful. It made you stand up and take recognition of just how great it is. When I think back on some of the great music that these pioneers of the music industry recorded, I'm humbled. Listen to the words of Sam Cooke's 'A Change Is Gonna Come'' or 'At Last' by Eta James..That's good music. That's not my opinion, that's a fact. You can bet your sweet ass and half a titty that Steve Wonder never rhymed Lemonade and Lemonade together and thought to himself:

"Oh this shit right here is gonna kill em at the club" You know why?

So, if for nothing else today we've learned that:
I'm out this bitch like a newborn baby. Deuces.

Gave Himself Away With That Shaking: Unc Got Caught Stealing $50 From Her!